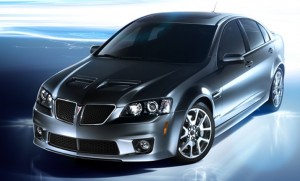 The Pontiac G8 GXP may have flamed out quickly, but not before the automotive press had a chance to take notice.  Car and Driver Magazine released a list of the 10 Orphaned Cars to Drive Before You Die, highlighting great post-WWII cars from brands that are no longer in production.  At the very top of the list is the 2009 Pontiac G8 GXP.

The G8 was first introduced in 2008, and the GXP followed the next year.  Equipped with a 415-HP V8 engine, it was the most powerful production vehicle the Pontiac division would ever produce. Combined with an optional six-speed manual (lesser G8s had to make do with six-speed automatics), the G8 GXP was capable of a 0-60 run of just 4.7 seconds.  Less than 2,000 GXP models were imported to the United States from Australia, where they were produced by GM’s Holden subsidiary, before production was halted as part of the Pontiac division’s wind-down.

Even though the Pontiac G8 was only available for two model years, many fine examples are still available used.  Only the best ones qualify to be GM Certified Used Vehicles, which are available for sale from Jim Hudson Buick/GMC/Cadillac in Columbia, South Carolina.  We served Columbia Pontiac owners for nearly 20 years before the division’s demise, and we are Columbia’s exclusive Pontiac Authorized Service Provider with special training and parts available to keep your G8 (or any other Pontiac) in top form.

We invite you to view our used Pontiac G8 inventory, or to browse our entire selection of used cars in Columbia, SC.