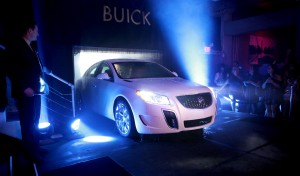 Even as the Pontiac division rides off into the sunset, GM is still producing a host of world-class performance vehicles to suit most any taste.  In particular, Buick has revived its sporting past by resurrecting the fabled GS (or Gran Sport) nameplate with the introduction of the 2012 Buick Regal GS.

The Buick Regal GS in Columbia SC is based off the 2012 Buick Regal, which draws its lineage from the European Car of the Year Opel Insignia.  This sport-injected platform lends itself nicely to the 255-horsepower turbocharged four-cylinder engine, coded LHU, that is a direct descendent of the 2.0-liter turbocharged engine found in the Pontiac Solstice GXP.  While it loses five horsepower to the Solstice, the Regal GS makes up for it in torque–295 pound-feet to the Solstice GXP’s 260–and is still good for a 0-60 time of under 7 seconds.  In addition, the new engine is FlexFuel-capable, allowing the Regal GS to accept blends of gasoline and ethanol up to E85, which lets Columbia Buick drivers choose from additional options at the pump that rely less on petroleum.

Regal GS will also feature Buick’s new HiPer Strut technology, a unique suspension geometry that reduces torque steer commonly found in high-powered front-wheel-drive cars. In addition, the HiPer Strut setup increases tire contact when under load, improves communication when steering, and makes the steering kick less when you hit a pothole in the road. Buick is also bringing Regal’s Interactive Drive Control System to the Regal GS, allowing the driver to adjust suspension settings and steering sensitivity from standard driving to an exclusive, full-on GS mode at the press of a button.  If that isn’t enough control for you, the Buick Regal GS will also feature Brembo performance brakes to bring all the action to a halt in a hurry.

A six-speed manual transmission will be standard equipment on the Buick Regal GS when it launches in fall 2011; a six-speed automatic featuring Driver Shift Control will come a little later.  Also standard are five-spoke 19″ alloy wheels, with 20″ polished alloy wheels with performance tires available; either will accent Regal GS’ exclusive race-inspired styling touches including a slightly lower ride heigh, unique front and rear fascias, rocker panels, and a rear spoiler integrated into the deck lid.

Those sporting touches carry through to the inside of the 2012 Buick Regal GS as well, with a race-inspired flat-bottom steering wheel and metal sport pedals to let your hands and feet remain in complete command.  You and your passengers will still travel in classic Buick comfort, with leather-appointed seats all around; the driver and front passenger get 12-way power adjustable heated bucket seats.  Satin metallic finishes distinguish the Regal GS from more pedestrian Buick Regal sedans, and the unique instrument panel glows white when you engage the Interactive Drive Control System’s GS mode.  Borrowed from the Buick LaCrosse, pushbutton keyless start and passive entry system adds a touch of hightechnology when starting your new Regal GS.